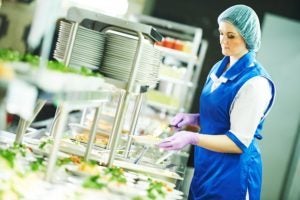 The City University of New York (CUNY) is the largest public university system in the United States. CUNY relies on third-party contractors and subcontractors to provide food services in cafeterias and coffee shops for its thousands of staff members and hundreds of thousands of students across 24 campuses. Many of those food service workers experience employment issues without union protections.

The survey's less than positive responses raised alarm among the CUNY board. Because the answers came from employees of different vendors, there is not one particular contractor to blame. Instead, the issues stem largely from CUNY's food contracting policies and processes, which currently include a lack of accountability of food service contractors to provide proper working environments for employees and comply with employment and wage laws.

Many of the survey conclusions involved how CUNY can improve its relationship with its food service workers to ensure greater dignity among the workforce. Many workers reported an inability to afford food for their families, having to work more than one job, or not receiving a raise—other than based on an increased minimum wages—during their employment. Only seven of the 111 respondents have health insurance benefits through their jobs.

While these results indicate less-than-desirable working conditions, they do not necessarily indicate specific employment law violations on the part of CUNY vendors.

The survey results, however, did report violations of both New York State and federal employment and wage laws, including:

Employees in the private sector are protected against wage, hour, and other employment law violations—and enjoy important rights if violations occur. If you believe your employer violated your rights, please contact Braverman Law PC by calling (212) 206-8166 or contact attorney Adam Braverman online for more information.