Am I a Victim of Wage and Hour Abuse?

You go to work every day. You are loyal and you put a tremendous amount of effort into your job. You often exceed reasonable expectations to cover another employee's shift, complete a project or meet a deadline.

But you don't get paid for that extra work. Not only is it disrespectful; it's illegal.

Wage and hour abuse by employers is all too common. You may have read about recent New York state investigations of nail salons or heard about the prevalence of wage and hour lawsuits in the restaurant and construction industries. However, wage and hour abuse happens in all industries, affecting a diverse range of workers including loan officers, insurance underwriters, IT administrators, drivers, cable installers, nurses and home health aides.

You Deserve to Be Properly Paid for Your Work

In the state of New York, employers must pay minimum wage for all hours worked. Employers must also pay overtime when you work more than 40 in a week (unless certain narrow exceptions apply). The wage and hour laws are established by the Fair Labor Standards Act (FLSA) which is a federal law that establishes minimum standards for employers across the United States. Individual states are permitted to enact wage and hour laws that give workers more protection than the FLSA and New York has done so. For example, the minimum wage in New York is $9.00 per hour which is higher than the federal minimum wage of $7.25 per hour. New York's wage and hour laws also contain special provisions governing wage statements, pay for tipped employees, and employees in the hospitality industry (employees who work for restaurants or hotels).

You May Have a Wage and Hour Claim

Despite these rules, employers routinely violate wage and hour laws. Employers have developed a number of tactics to pay employees less than they are legally owed. Below are some examples of common wage and hour violations which an experienced wage and hour attorney can counter on your behalf. 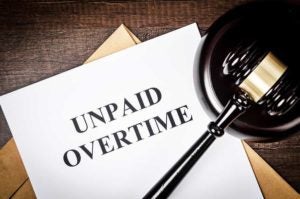 In New York, employers generally must pay workers an overtime rate of 1.5 times their regular rate of pay when they work more than 40 hours in a week. Common strategies employers use to avoid paying overtime include:

Special rules apply to employees who receive tips. An employer cannot require tipped employees to pool their tips with employees who do not customarily receive tips, such as chefs, food preparers, other kitchen staff, and janitors but many employers do it anyway. In addition, under New York law, restaurant owners are barred from participating in the tips. Finally, tipped employees may be entitled to substantial money recoveries if their employers have failed to provide the proper notices under New York law.

Misclassification of Employees in New York

Employers are prone to giving employees important sounding titles such as “administrator” or “manager” in order to claim that the employee is exempt from overtime pay and thus must work long hours without overtime compensation. However, just because an employee is told she is exempt from overtime does not mean that she actually is. You may be misclassified if your employer refuses to pay you on the basis that you are in an executive, professional, administrative or computer-related position. Braverman Law can help determine if you have been misclassified as exempt. Please read our page about misclassification of employees to learn more.

Working Off the Clock

Employees must be paid for all hours that they are made to work, even if the employer does not formally authorize the time. Off the clock work can include setting up a restaurant before a shift formally begins, completing tasks that the manager believes should have been finished during the shift, undergoing training during an employee's personal time, or even checking or responding to email during an employee's personal time.

Retaliation Against Employees Who File a Wage & Hour Complaint

New York law prohibits retaliation against an employee who files a complaint about an employer's violation of the wage and hour laws. If you have filed a complaint against your employer and are being retaliated against, we want to talk to you.

We also invite you to read the links below, which are written with you, the worker, in mind.
Abuse of Independent Contractors
Misclassification of Employees
Wage Laws for Servers and Tipped Employees
Industry-Specific Wage and Hour Violations

At Braverman Law PC, we fight employer wage and hour abuse and can help you be compensated properly for all of the hours you have worked. Call us today at 212-206-8166 or contact us online to schedule an appointment. Se habla español.